Reduce the requirements for $eth and $gear deposits.

This GIP-37 is the most painless quick way to adjust limits and not introduce any delays.

This proposal is a blitz-proposal that doesn’t modify the previous voted proposals. You already know of GIP-31/1, GIP-25, and GIP-36. This proposal only suggesting blitz fixes based on the reality that the 1st stage of 0xcider $gears collection is just not getting enough deposits, so it simply reduces them.

The launch is to remain possible…

95M out of 120M minimum, with about 12 hours left… Although it isn’t right to call $gear depositors sellers either, because they can be selling volatility + while earning rewards + betting on high volume + participating in the launch + could just be confused with the new model. Anyway, point being: there is not enough supply side, not enough $gear willing to sell now. It’s very interesting game theorie!

But the fact is: the current contract is hardcoded and isn’t able to change limits. If 120M is not reached - it will go to the withdraw phase and make the DAO come back to the drawing board figuring out a new plan. That is fine and can be done; it was expected in code, but:

The goal is to:

This proposal is structured as “IF not, then GIP-37”. In case 0xcider first stage fills up normally, you can disregard points 1 & 2. Point 3 should be a separate voting option and can be executed even if the minimums are reached without any intervention, I believe it’s a worthie change.

For now, it goes on until as normal, you can deposit. Nothing will be different with it. If it does not hit minimum 120M, the contract will not automatically go into “withdraw” phase - but all the balances will be repurposed into the exact same contract just with lower limits (both for eth and gear). So if this proposal is to be accepted, you have only 12 hours left to deposit into Cider'ed Liquidity

All the deposited 0xcider $gear will then be accepted as is. Get in!

That would be Dec16 morning CET, 24 hours after end of stage 1. This time will be used to configure the new contract with multisig. Nothing will factually change, just changing the contract. So you still participate in 0xcider, all is normal, but you don’t need to pay the gas fees. Easy solution!

Your $gear will go into a similar contract, that’s it. No extra action needed.

The new (same code, just different parameters) 0xcider contract will start from the ETH deposits stage. The new limits will be reduced proportionally, to keep the same $0.015-$0.030 price range as voted before. Same terms, nothing new, just less amount required to make the launch kick off.

That’s it. The rest is the same as before. If it all works out, then just change the snapshot strategy back to the same one it used to be - if necessary. Keep the GIP-36 LM the same as it is. Christmas time!

FairTrading 6-day fees will be automatically distributed among the 6-day LPs who will participate.

Since GEAR/ETH LPs now have extra 20%+ APY liquidity mining program, I suggest to use the FairTrading 6-day fees to distribute among the 6-day LPs. Meaning distribute over the participants in this range time, via the merkle claim to be deployed a few days after the end of 0xcider. That way, both $gear and $eth depositors will have more interest to participate in launch. The APY for this 6 day period can become quite good if there are many swaps, making it a great incentive without new inflation!

Meanwhile, this GIP-37 blitz vote will take place (I will make snapshot link in a bit). All 0xcider depositors will be able to vote as per their normal voting weight, even if they deposited their tokens. For that to happen, snapshot strategy should be updated by one of the admins and take this into account. I already did it, is easy, ask someone to use this contract: DrunkVoting | Address 0xC25983EbD11b14357D3139d3F5a33326f256713a | Etherscan

This vote doesn’t propose anything drastically new or any new inflation. The opposite, it asks for LESS. To avoid delays, I suggest this vote must pass even before the 3-day expiration period as long as it hits 200M quorum as per the regular rules. Governance is important, nobody is free to decide themselves what to do. But to avoid confusion and not create an extra 4-day waiting period, we must pass it before the stage 1 ends. That way, there is only 1 extra day in the new setup, without any complexity.

Nothing changed for you, price range stays the same. You don’t need to do any extra steps or any extra transactions. The process overall will just be +1 more day (automatically). And you will also get FairTrading fees distributed among those 6 day 0xcider LPs only, instead of sharing them with new LPs for 4 months like it was panned previously. You actually win! And you can vote by the way.

Nothing changed for you, just the stage will start on Dec16 instead of Dec15. 24 hours window for all multisig transactions to be executed. the contract will just accept less $eth then. So it’s a lower cap now, FCFS still. And you will also get FairTrading fees distributed among those 6 day 0xcider LPs only, instead of sharing them with new LPs for 4 months like it was panned previously. You actually win! 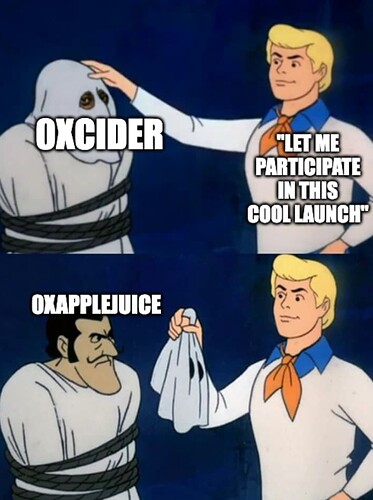 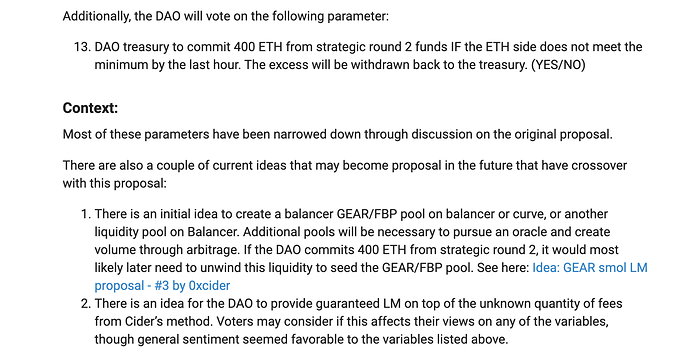 LFG … I can’t see any issues just juicy rewards for cider drinkoooorrss … bring it on !!!

No need to manually withdraw & deposit, everything would be done automatically

If I’m not mistaken, this assumes everyone approved an infinite amount of GEAR. I, for one, didn’t. Silly me I guess.

Not really - since the first Cider contract has all the deposited GEAR, only it needs to approve the GEAR for the second contract, and then it gets transferred. This can be done by the fin multisig

I really like option 3, it makes sense. I think it should be there!

And I also get the point of the proposal, thank you @0xcider. While it makes sense, and the intentions are great - I also find it weird [echo’ing jules’ words from Discord] that this is some:

Conceptually speaking, a withdrawal window can be made. Then those who don’t like changed terms can withdraw. Majority will likely stay anyway, so it’s fine. Can you make it?

What I find cool is that many have appreciated the model and its interesting game theory. Maybe just regroup and re-launch it either next week or mid Jan when everyone is back? You can also pull tokens out of the contract then the same way, so many won’t need to spend on gas. Those who would want to leave could leave. And then just launch in January. Or next week, idk I can’t participate anyway.

But if blitz governance with enough (subjective term) participation from current 0xcider participants approve this - I also don’t find it particularly bad. It means they directly support then.

Because after all, option 3 is a net-benefit imho.

Makes total sense to me! Let’s move this along

If at least one person expresses desire to withdraw and have the option to redeposit in the new model then my vote is against.

So far, I have only seen concerns that someone else might have a concern. Therefore, currently support #1&#2

For #3, this defeats part of the purpose of cider, which is to make liquidity a bit more sustainable. I do think there is a flaw in the model where the first LPers are locked for 6 days with no extra rewards - that incentivizes ppl to wait to LP and potentially wait to sell into the liquidity instead of sell via cider. This could potentially be solved by allowing them to fully exit in eth with whatever the current sell penalty is during fair trade, but that’s a discussion for if anyone uses this model in the future and wants to tweak jt. We also have close to the minimum GEAR committed so why blow ALL the fees? It’s a waste of GEAR.

So with that being said, I would support a portion of fees being disproportionately allocated to LPers who LP during fair trade. Say, 20% of fees go to fair trade LPers, then the remaining 80% used for LM as normal.

20%. We already have 90m gear committed. That’s prob enough already but a bit more would hit the previously agreed minimum. Don’t see the point to randomly giving away extra. We don’t know how much gear it will be, if it ends up being a lot we’ll look real dumb and if it’s not much then it didn’t matter anyway.

It isn’t for gear though but for $eth side?

Edit: blitz votes are fine now because there is no liquidity ie no one can buy gear for a gov attack, and even if they could voting isn’t on chain rn.

Anyone saying reduce quorum temporary: nah, unless you wanna try to have a blitz vote for that. Otherwise who decides? Multisig? Doubt they want to own that
Decentralization a spectrum but why make a centralizing decision for something that really doesn’t matter much if there’s 1-2 day delay, and there may not even be one if this proposal passes?

Gotcha, my bad missing that point. Still don’t believe it should be 100%. 50% maybe safe to make sure we don’t end up with this same situation on eth, but my previous points still stand why not to do 100%. It’s all subjective/guesstimating but I can get behind 50% as a max. I’d probably pass anything 20-50%, will await more opinions.

I agree that 0xcider LPs might need a bit of an extra boost to assure the ETH side doesn’t struggle to fill like the GEAR side.

I renamed your proposal to IDEA because GIP-37 is needed for @ov3rkoalafied sorry.

For this vote, simple for against abstain

If the deposit phase is over, then the incentive is lost, so #3 should be voted together

I’m in favor of this. IMO, #1 & #2 don’t change anything, just fix the 120M GEAR cap. It won’t present any liquidity issue because it will be close to what was initially planned.

I like #3, but I agree that it has to be voted because the change from 4 months to 6 days is quite radical, and liquidity providers should have their say in this.