I don’t agree with you. What you are saying is to avoid the problem of the price of gear tokens. No one will always pay for the potential apy.

LPs will surely exit if GEAR tokens (most of the APY) unlock in several years. On top of that, early testers/CA miners will be diluted (in contrast of the no vesting promise).

The market is clearly starting to get better. If you don’t feel that, then you should keep learning. Prices and investments are determined by the market and not your personal opinion. All I can say is that your point of view only guarantees the interests of the team but does not care the interests of CA miners and early testers. You said that you are unwilling to take risks, then I want to ask you how many fools are willing to mine in a pool with no clear profit? The team is responsible for the product, and the market determines the product. A team that tries to steer a project by delaying it is a failure, especially when the market is starting to turn around.

The market is clearly starting to get better. If you don’t feel even that, then you should keep learning. Prices and investments are determined by the market and not your personal opinion. All I can say is that your point of view only guarantees the interests of the team but does not care the interests of CA miners and early testers. You said that you are unwilling to take risks, then I want to ask you how many fools are willing to mine in a pool with no clear profit? The team is responsible for the product, and the market determines the product. A team that tries to steer a project by delaying it is a failure, especially when the market is starting to turn around.

I thought we all reached consensys that:

Also, please clear your definitions there ser because muggle is an (amazing) DAO contributor. He does not have large personal position [yet] and is a delegate like many other delegates. So it wouldn’t be correct to call it all the same name. I believe what you are trying to say is 3 initial members with decent bags, which is me, apeir99 & 0xmikko (the founder). Everyone else is on equal footing + there is this: 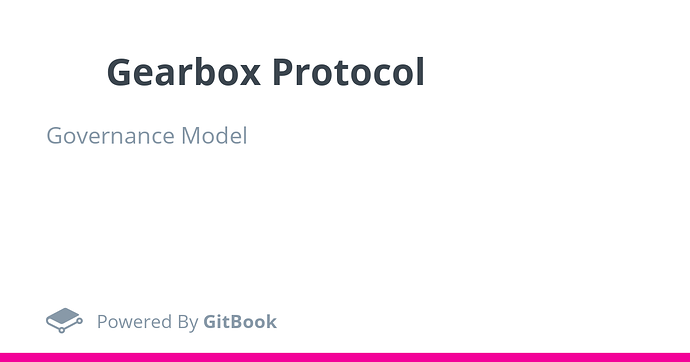 But many “opinions” are missing the fact that there must be a PLAN (liquidity, traction, staking, etc.) which people miss and just want to scream omg when moon. Help make a “plan” sers! All the messages above are subjective but they are also valid. I don’t think there is any consensus to be reached in text anymore, it must be taken to voting cc @andresghost good post ser! Thank you. 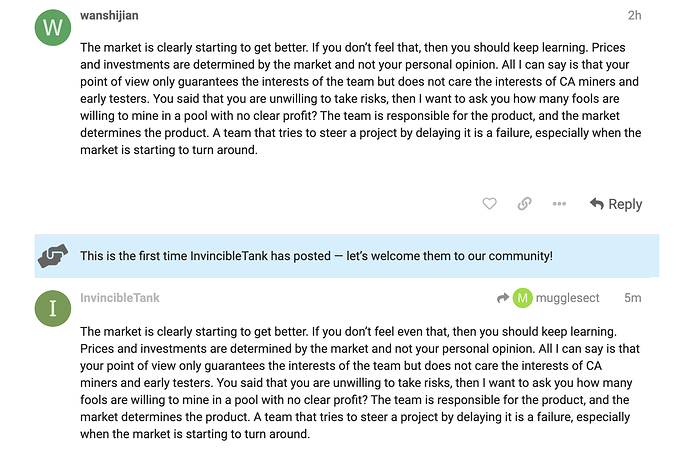 Ser I don’t really have a stake or a bag of GEAR, all my GEAR combined would less than 700k I think and they unlock over 1 year. Majority of my gear is through the same mining as well.

LM can stay for 1 or more, yes but there are enough people looking to accrue gear imho. This I am saying after interactions w enough LPs and not per my feelings.

There’s no trying to time the market, I just don’t see the additional utility unlocking brings. That’s all really.

Other discussions aside - aura/balancer reccomended we pair GEAR with stETh as then they will help incentivize the liquidity a bit (and since most of it will be POL at first, that means the DAO will get a bit of revenue). I think a 0.3% fee is OK here since the point of this pool isn’t revenue (1% too high esp if pairing with stETH I think, though the more tokens pair with stETH the better that routing becomes).

The transferability of tokens should be the consensus. Not too many stupid farmers will keep mining worthless coins. Have confidence and let the tokens flow! We can do well, the bull market is coming!

I funded a credit account and have been waiting patiently for a year for the tokens to be worth something. I have a decent amount in a CA now and also some on the passive side. I will most likely leave if the token is not unlocked after this vote. I like this project and want to stay here but farming a token with no price for too long just seems silly, especially in current economic conditions. If the token is unlocked I dont think i would even sell its just a piece of mind thing to see you are earning money. This is a great project with top tier security as well as team and community, if there is an initial selloff i believe it will recover nicely and we shouldnt be afraid to let that happen. There probably does need to be some use for the token other than governance, thats a whole other topic. That is all, hope the vote passes.

Thank you for this great thoughtful comment, can’t disagree! Is time

Anyone have thoughts on potentially removing the whitelist for the gnosis auction? Arguments to keep it and who should be included (currently basically anyone that has gotten GEAR or interacted with the contracts up until the auction are eligible - thus people can still get added after the proposal passes, no “snapshot” really) or arguments to just get rid of it? There is no attack anyone can do, IE it is not necessarily required to run a gnosis auction.

Waiting for official transferability proposal. Please don’t use market conditions as your excuse for delay this time.

I’m LPing ~$1.5M across the USDC, ETH, and wstETH pools (a decent % of my nw, I’m committed). Since my participation in the credit account mining event, I’ve tried my best to keep up with all proposals and developments on Gearbox (even if I don’t provide much active feedback) because this is truly a new primitive with incredible potential and I want to be part of it. With that said, my only disappointment with the direction that the DAO is taking lies in the transferability of GEAR. These yields aren’t real, keeping LPs hostage without the optionality that they are entitled to, is a perfidious behavior that inspires no trust in the DAO. V2 is live, the organic APRs prove Gearbox’s product market fit, so why wouldn’t the token be live by now? It’s been one year, LPs will grow restless, I intend to accumulate and buy GEAR upon launch but it’s important to also acknowledge that for me this implies an opportunity cost with SC risks, at the very least I’m entitled to the ownership of my own tokens. The vague promise of a token launch on the horizon is unsettling, let the market find an equilibrium with supply and demand instead of artificially maintaining APRs that are misleading. I’ve seen people discussing that this resistance to launch the token is somehow connected to the vesting schedule, I refuse to believe that, but again, LPs have a limit when it comes to patience, and in my opinion, that limit is being tested. The overhanging GEAR supply from LPs is growing with each block, the longer it takes, the more violent the PA around the token launch will be. With that said, I highly regard Gearbox’s DAO contributors and I want to be a part of this journey, but these are my concerns and I had to create an account specifically to voice such concerns because I believe that they are hindering the project.

It’s time to launch GEAR, I’ll do my part holding the dumpooors at the gates by buying their blood.

Already planned and going live in a couple of days - to be executed in a couple weeks.
PS: thank you, you are chad!

Appreciate it, waiting for the withdraw fee to be removed to deposit more funds into USDC and ETH. Also happy to see that we’re going to stop supporting useless TVL such as wstETH and WBTC, the organic APRs are all that we need to look at to optimize GEAR emissions.

Heads up from the Frax community. We would be very, very, very (3x) interested to see a Gear/FraxBP on curve. This pool would receive CRV, CVX, and FXS incentives from the various gauges involved.

Balancer is great, but it would also be good to have a separate pool on Curve. Not sure how the DAO feels about splitting liquidity, but the incentive structure will be in place if FRAXBP is used.

This is great work. And I support the BPT idea fully. Big fan of the tech there.

But I don’t like the idea of having the toke tradable before there is a roadmap in place for what the token will do.

This just encourages merch farmers that need to be offset by buyers that are hesitant bc they don’t know the value statement if the token. I think the vast majority of current farmers are ppl that believe in the system, or at least believe in the success. When the token is tradable, the only consideration for farmdumping is are the contracts solid, and is can the LP take the pressure.

Obv, ppl want their apy, and they don’t want to be dragged along for long, and hype is a fire that burns fast. But if the LP can be quickly followed by at least staking for the share of fees that were for referrals, or some portion of that. People will have more metrics to consider risk of holding.

veTKNs are not a fool proof mechanic that will solve it. And veNFT are clearly superior. But these need to be considered carefully. Staking is almost a no brainer for this intitial phase assuming it’s not fed with inflation.

Gear could also be used as a fee to access leverage. Paid as rewards to the supplies. Thus reducing inflation further.

Those are just some ideas off the top of my head there. But i would rather, personally, continue to hodl without any candles red or green while a clear understanding of the GEAR utility I’d developed and decided on.

Closed at the request of koala.