Why no crv, cvx, mim, and spell in the list?

Probably in that order. Gotta get the flywheel going.

for crv, cvx, spell - high volatility, harder to set parameters. Can evaluate them individually after protocol launches and we verify everything works with more conservative assets>

mim - Hmm it does have a yearn vault, so as long as it meets all the other requirements maybe it could be included? Got a real nice APR on yearn through the crv vaults. However see mikael’s point #1 above, we can add it later.

Why don’t we whitelist stable vaults of Convex?
I believe many choose Convex over Yearn.

Regarding vaults, I think that the yields for yvDAI and yvUSDC are too low compared to the borrowing interest rates and they can’t provoke enough demand. I believe vaults for FRAX, 3pool, alUSD, etc. will do.

Also, while it is not stable vaults, there must be a strong demand for Convex/Yearn vaults for stETH.

For univ2 - rebasing tokens would not work; however, sOHM is the rebasing token & OHM is not (designed to be the unit of account).

OHM (while volatile) - is quite an active pair on Sushi. However, as mentioned, we are in progress of migration to v2. It would be best to wait - it should not take long for most of our liquidity to be in the new new version.

Agree on the list - and supportive of FEI given their recent v2 launch as well. 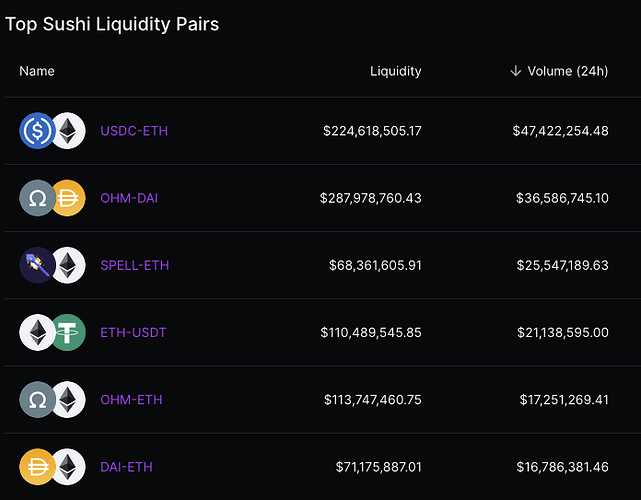 I would also suggest to open the protocol with a small allowed token list. this could be a good choice not only from a safety perspective but also from the token utility perspective.

https://twitter.com/apeir99n/status/1471580228883521547?s=20
the vision of Gearbox is to offer leverage as a service. a good go-to-market strategy could be like:
1, offer the service to a small group to prove the product-market fit and also as marketing.
2, gradually grow the customer base and community.
3, build a strong brand and make gearbox the center place for leverage.

in order to prove the product-market fit, I would recommend adding yvDAI and yvUSDC to the list. from the token utility perspective, instead of adding more tokens, I think we should discuss which token that ov3rkoalafied and vasilysumanov proposed could be excluded from the list. I would prefer them to come vote for the Gear service

hi the vote is here? i like gear ,hope join Gearbox Governance.

MIM has only USD Chainlink oracle. @mikael correct me if I’m wrong, but existing design can use only eth-based oracles?

Convex is good to add, but adapter for it isn’t ready yet

For current version, we needed ASSET/ETH pricefeed to be able to add.

We set 2 token strategies for Snapshot, one is to hold GEAR, and another token is issued to vote for other airdrop personnel only

After the voting, the airdrop personnel will exchange temporary voting tokens for GEAR

But we need to consider a gas problem

I use translation, please point out if there is an error

I really would love to see Toke on there; if we cant get it first round lets make sure its on the second. I think gOHM and CVX on second round would make sense as well.

I think CVX also makes a lot of sense too, especially if we are going to be leveraging Curve.

So, it’s time to move forward. As a resume of discussion

Added all the tokens that were in the discussion, which seem to be safe enough for the start. I propose to add this as a list - and then the community will choose any number from list below… 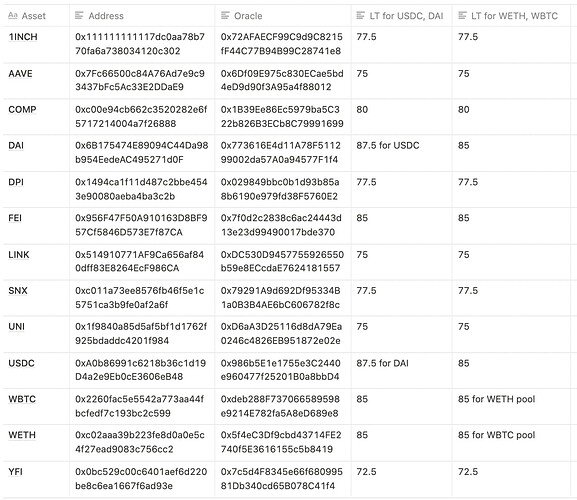 what do you think? if it’s ok - will put it on snapshot

Reduce the LT for non stables between 60 to 75 max.

To whom it may concern,

Good afternoon, I see that there are 2 Uniswap contracts and 2 Yearn contracts but CRV only has 1. I believe it will be only fair to also add CRV Tricrypto2 pool for the following reasons:

Thank you for taking the time to read my post and I hope you have a nice day!

Would you please mind throwing this into the GIP @akita? Link here:

Thank you, apologies for including the wrong ones! Do you think this prompts re-making snapshot or would you say this editorial notice is fine as is? I assume people vote with the assumption for the most relevant version, but arguing this way is a dangerous rabbit hole (pun intended). Wdyt?

If you don’t mind, will close the topic here to funnel the conversation there.